All breather valve series products manufactured by Dragon Industries are manufactured according to the standards of SY/T 0511.1-2010 and API 2000.

The excellent performance of the 1000 series breather valve, including the pipe-end type breather valve, the pipeline type breater valve, the single-breathing valve and the single-suction valve, and its excellent performance takes the lead of similar products in the country. The breather valve refers to a kind of valve which can ensure the tank space to be isolated from the atmosphere within a certain pressure range and can communicate with the atmosphere (breathing) when exceeding or being lower than such pressure range. It has the following functions that it prevents the storage tank from being damaged due to overpressure or vacuum, and meanwhile it can reduce the evaporation loss of stored liquid. It mainly comprises a valve seat, a valve bonnet, a protective cover and two groups of starting and closing devices of vacuum and pressure control. The starting and closing device includes a valve disc, a guide rod, a spring, a spring seat, a sealing ring, etc. When pressure in the tank reaches the rated breathing positive pressure, the pressure valve disc is opened, vapor in the tank is discharged; and when the vacuum degree reaches the rated suction negative pressure, the vacuum valve disc is openned, and the air enters. 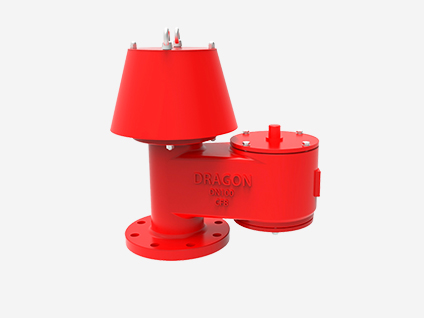